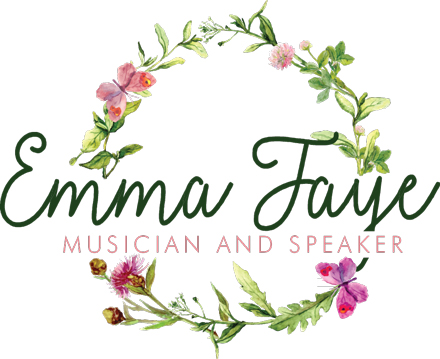 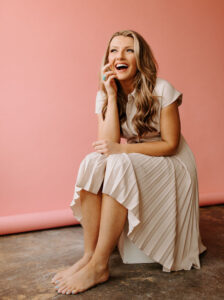 Emma Faye is a national speaker who has touched the lives of thousands of people who have had the opportunity to hear her story. If there is one thing that her audience remembers about Emma, it is her ability to connect on a raw and genuine level to those around her. She speaks with authenticity and with an immense passion for Jesus.

Emma Faye went profoundly deaf at the age of three and has spent her life turning a disability into an ability. Emma Faye is an internationally known role model and public speaker for the (D) deaf and hard-of-hearing (HOH) community and Founder and Executive Director of Aid the Silent.

Aid the Silent is a system of support for the four main programs of: deaf ministry, deaf education, deaf awareness and deaf resources. The overall mission of the non-profit is to aid economically disadvantaged deaf children and teens to reach their full potential and to live life more richly by providing funds to receive hearing and speech resources (hearing aids, FM systems, speech therapy), ASL lessons, ministry-related activities and education enrichment programs. 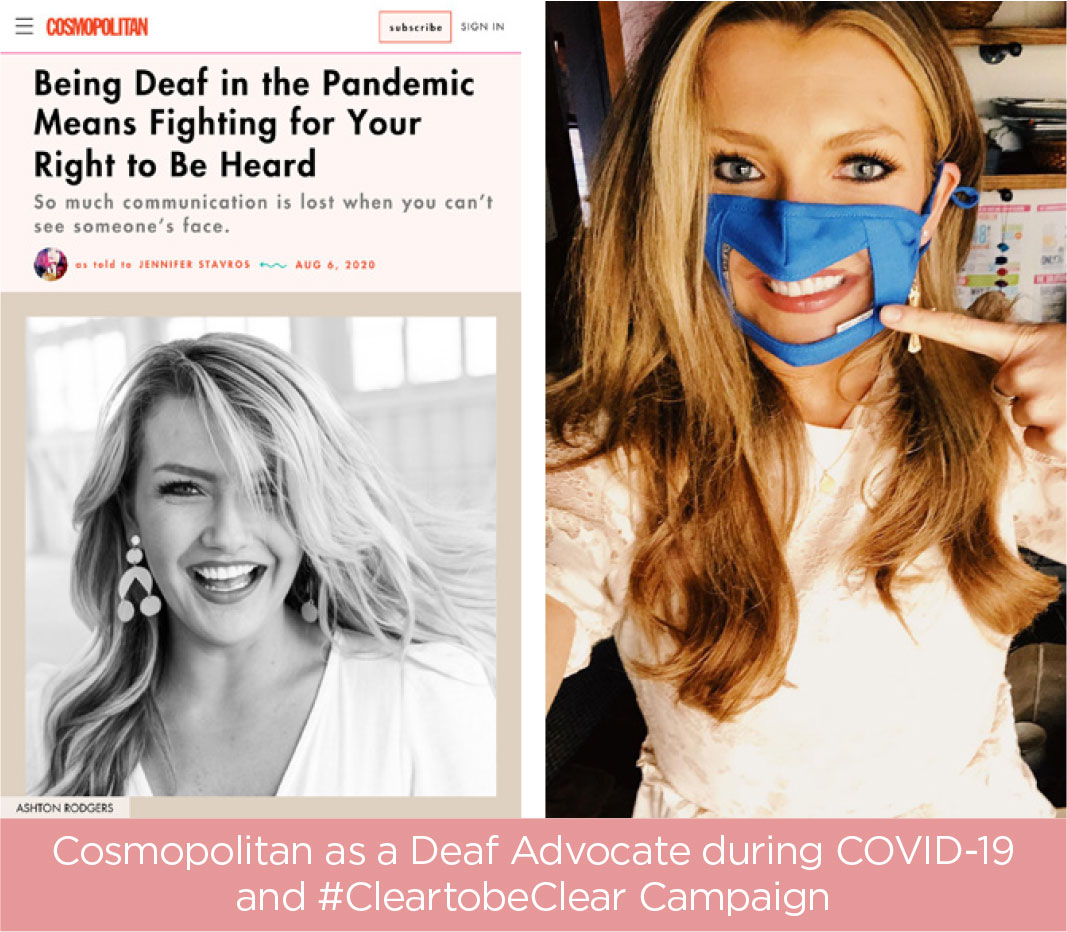 Emma Faye created the campaign called #ShowYourAids to encourage the (D)deaf/HOH to be proud of who they are. The campaign went viral with 10,000s of people posting their hearing aids and implants all over the world – giving Aid the Silent a global presence.

During the Covid 19 pandemic, Emma Faye was featured on Cosmopolitan magazine, Fox Los Angeles, Fox Houston, Houston Chronicle, San Antonio Express, San Antonio Magazine, Yahoo News, Yahoo.com, Yahoo Style and many more for her advocacy work of #CleartoBeClear masks campaign promoting and selling clear face masks for the deaf and hard-of-hearing. What started as an injustice for Emma Faye of not being able to navigate life under the Covid mask mandate and being denied service – turned into a national movement for the deaf and hard-of-hearing. Emma Faye’s non-profit has sold over 35,000 clear masks. 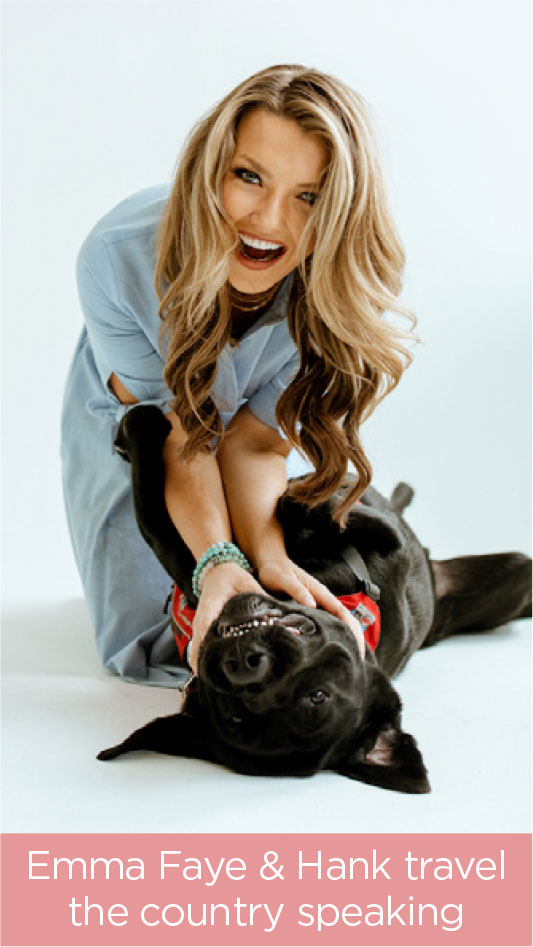 Emma Faye travels around the country with her service dog, Hank, sharing and encouraging others to live their fullest life possible, no matter what the obstacles to always follow your dreams by never giving up. Emma Faye speaks frequently at conventions, ministries, schools, churches and conferences telling other her personal story of overcoming and letting others know about the programs Aid the Silent offers to the (D)deaf/HOH community. It is because of her ability to communicate via sign language as well as spoken language that she is often a bridge between the deaf and hearing world. She has shared her story at over 380+ speaking engagements and events. 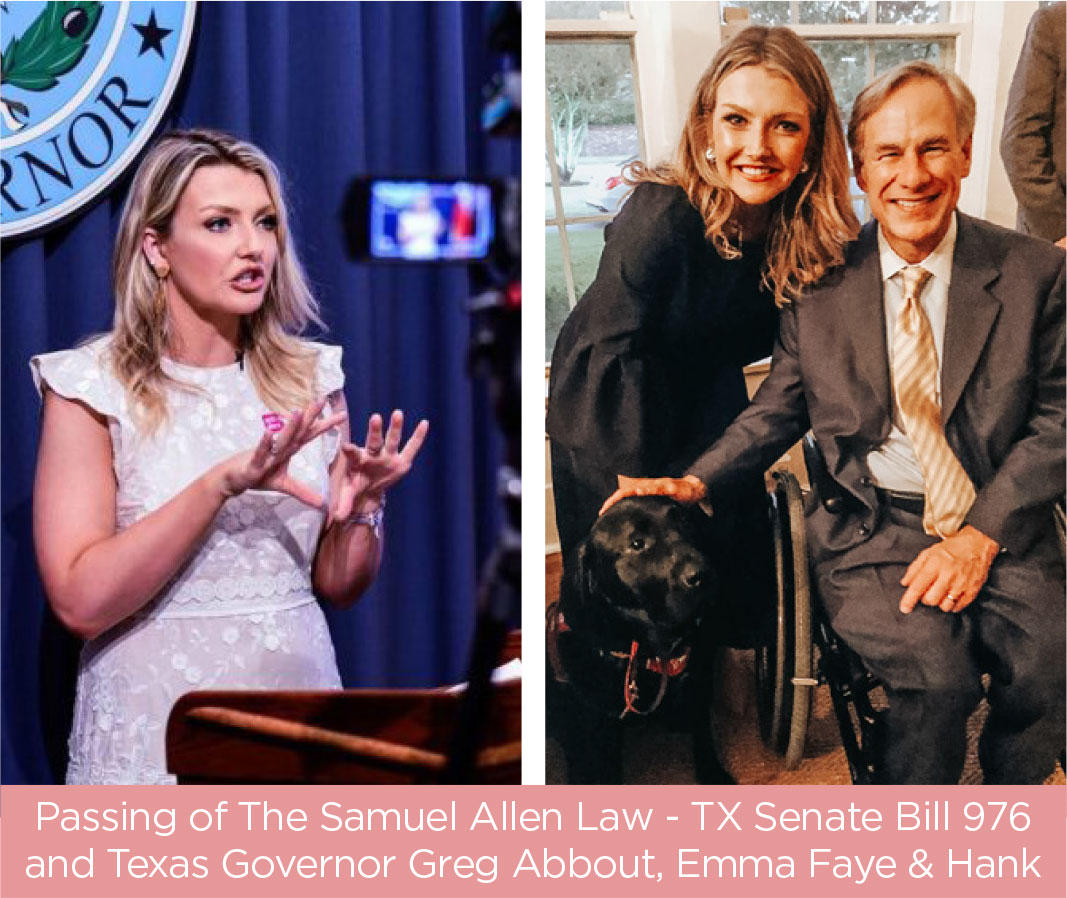 Emma Faye lives by grace and loving others deeply, but she is also a feisty advocate when needed for those who do not have a voice. So much so, Texas Governor Greg Abbott appointed her as one of 12 on the Governor’s Committee of People with Disabilities (bi-partisan committee) being the youngest person ever appointed at 22. She is now serving her second term on the Committee until 2022. This committee allows her to assist in writing policy recommendations based on public testimonies, the rights of those with disabilities and work with other government agencies to provide solutions.

Emma Faye publicly advocated for the largest theater in San Antonio to offer captioning for their (D)deaf/HOH patrons and won with Star Wars being the first movie played there with open captions. She advocated for deaf rights with the Texas Court Reporters Association for captioning legislation as well as hearing aid and implant insurance coverage legislation and personally met with eight Texas State Representatives and Senators on the importance of passing those two bills. She has testified on the House floor to mandate that schools bring back audiology into the school system. In addition, she joined forces with Asperger’s 101 and testified for The Samuel Allen Law – Texas Senate Bill 976 – that passed and allows people with autism, deafness and other “communication impediments” to register vehicles with the DMV so when an officer pulls them over, the officer is already aware of the communication challenges prior to approaching. Emma Faye is the spokesperson for this law in the State of Texas on all Public Service Announcements. 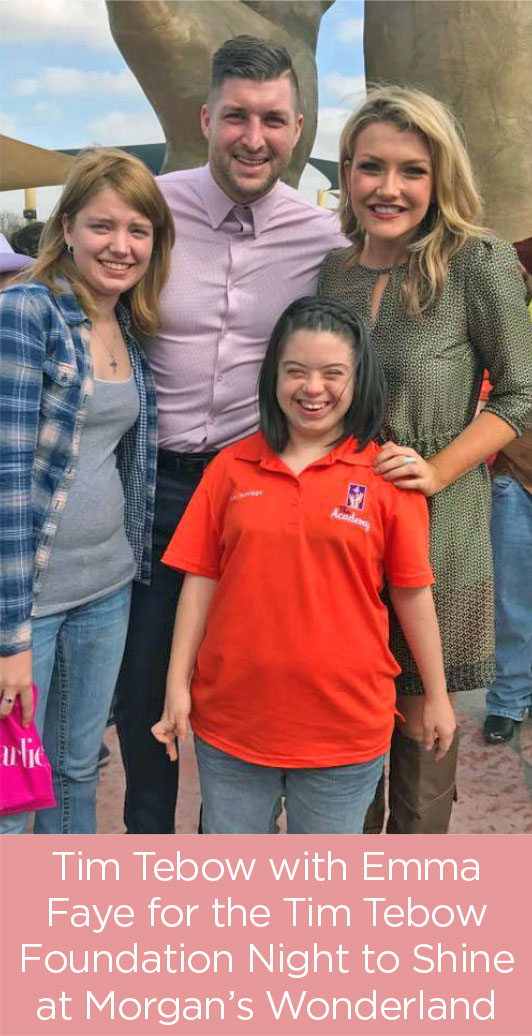 Emma Faye was named San Antonio’s Woman of the Year in the 2018 class of 40 Under 40 honorees celebrating the city’s rising stars. She & Aid the Silent were honored by the San Antonio Business Journal and The Najim Family Foundation for their Corporate Philanthropy & Nonprofit Awards for Nonprofit CEO and Senior Manager (Emma Faye) and Nonprofit of the Year (Aid the Silent) for small to midsize. She was also named Best of City of San Antonio by San Antonio Magazine for Best Pageant Queen for using pageants as a platform to advocate for the (D)deaf/HOH community and made the list of “9 Utterly Astounding Women Who’ve Shaped San Antonio” by KW San Antonio for her advocacy endeavors. Morgan’s Wonderland honored Emma Faye by placing her on their Wall of Fame as an individual who has gone above and beyond to do great things for people with special needs. In 2020, she was chosen as Oticon People’s Choice Advocacy Winner. 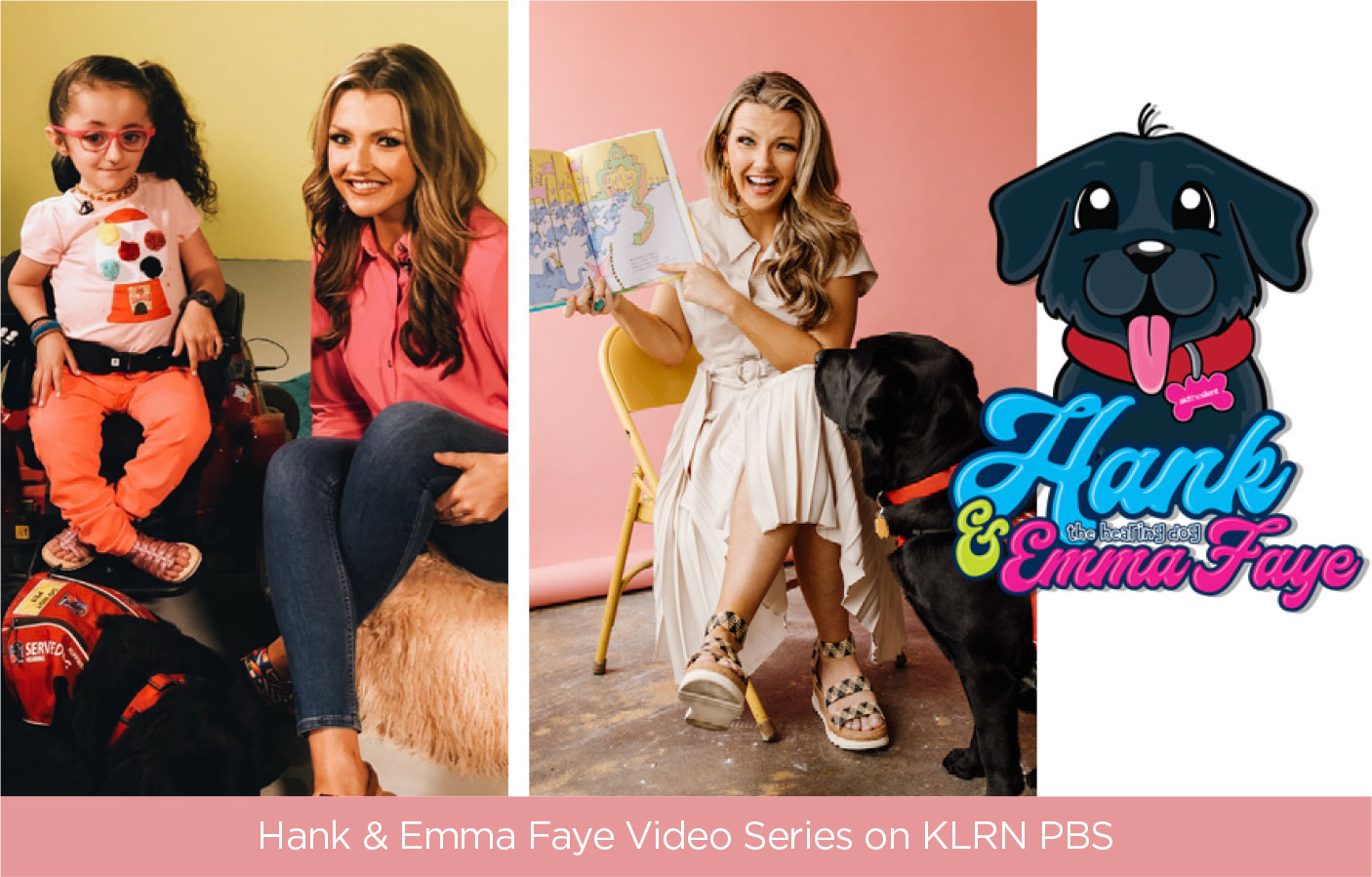 Emma Faye and Hank are currently on a video series titled “Hank and Emma Faye” for KLRN PBS focusing on inclusion, kindness and loving your neighbor well. She was one of the five characters for the IMAX movie “Into America’s Wild” produce by Academy Award®-nominated producers MacGillivray Freeman Films narrated by Morgan Freeman. This movie was released this February 2020 at the Smithsonian in DC and is being shown world-wide on IMAX and giant screens as well as sponsored by Go USA – the US National Tourism Department. She also spent six months filming a pilot show for ABC called “Ordinary to Extraordinary.”

.
With over 60+ TV appearances, two of which were broadcast syndications that aired in 50 markets on hearing loss and the #ShowYourAids campaign, Emma Faye is comfortable in front of the camera. She was featured on Texas Country Reporter for her non-profit work with Aid the Silent and Good Vibrations Music Festival which also won the Barbara Jordan Media Award from the The Governor’s Committee on People with Disabilities – Broadcast Winner for the show “Love Hears: Emma Faye Rudkin.” She has been featured hundreds of times in local and national print, digital publications and radio interviews.

Although Emma Faye is profoundly deaf, she sings and plays four instruments: piano, guitar, ukulele and the kick drum. Music is something she feels and wants others to know that deaf people enjoy music through other senses and not just their ears.

Emma Faye and the Aid the Silent team throw Good Vibrations Music & Arts Festival, a fully-encompassing (D)deaf/HOH accessible all-day music festival that brings together the (D)deaf/HOH and hearing worlds in a way unseen before through a series of efforts that enhances music for festivalgoers through ten hours of live captioning, ASL Interpretation, t-coiling, vibrating backpacks, sound wave wall and an LED dance floor that syncs to the music. This festival is attended by several thousand each year. Her Good Vibrations Music & Arts Festival won Best of Fest for Charity Music Festival in Santa Barbara, CA presented with Jeff Bridges, Kenny Loggins, TBone Burnett and the Coen Brothers.

Emma Faye was the opening musician for Lysa TerKeurst, Max Lucado, Ben Rector, Penny & Sparrow, Matt Wertz, Kris Allen and Parachute. She, along with musician Ryan Proudfoot, co-wrote and produced the soundtrack for the documentary “Love Hears.” The video project that came from the soundtrack “Love Hears: In the Silence” went viral and has reached more than 352k, 190,000 views off the Aid the Silent Facebook page and was shared 1700 times. Love Hears is also available for download on iTunes, Spotify, Amazon Music, Google Play, Apple Music plus 150 other outlets.

Emma Faye was Miss San Antonio 2015 and 2017. In 2015, she took individual awards for Overall Talent, Overall Interview and Miss Congeniality. In 2015, she placed Top 10 in the Miss Texas Scholarship Pageant 2015 where she won the Inspiration Award, Quality of Life Award, Academic Interview Award and Spirit of Texas (Congeniality). Emma Faye was again crowned Miss San Antonio 2017 being the first to hold this title twice since the first titleholder in 1923 where she won Overall Interview, Evening Gown, Community Service, Photogenic and Spirit of Texas. In July 2017, she placed 4th runner up in the Miss Texas Pageant 2017 walking away with both the Community Service and Quality of Life awards for her work with Aid the Silent. Emma Faye has been Fiesta Royalty for 2015 & 2017 Fiesta San Antonio and has appeared in dozens of parades and events on behalf of Fiesta. Fiesta is a citywide celebration benefiting area nonprofits.
.

“I lost my hearing at 3 years old to a severe-profound level of deafness. Deafness has made me who I am but it does not define me. This world without sounds has shaped and molded me to not let what people call a “disability” hold me back from any God-given abilities. We are given the power through Jesus to turn a disability into an ability. I so desperately want not only the deaf, but anyone who feels held back by their circumstances or story, to know that they can overcome. I dream for people to know that their stories are beautiful and for the deaf to become all that they were made to be. Good and beautiful things can rise from the ashes.”
–Emma Faye Rudkin